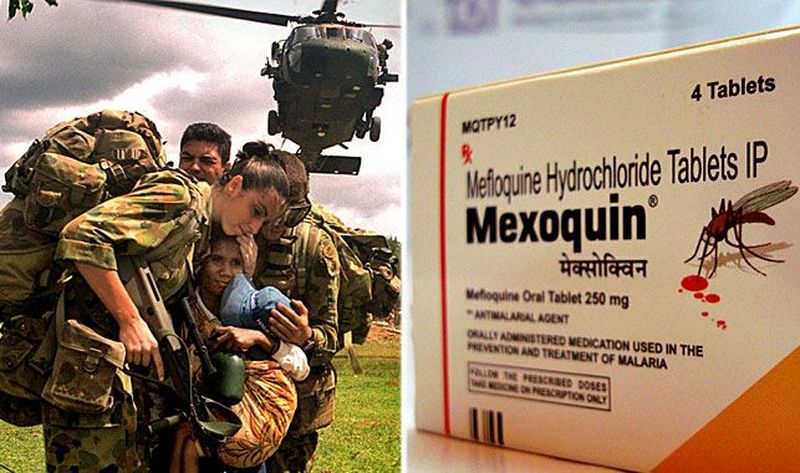 Australian soldiers serving in East Timor during 2000 to 2002 were given the anti-malaria drug mefloquine.

Schizophrenia, hallucinations, seizures and self harm are among the disorders allegedly affecting Australian service men and women who trialled controversial anti-malaria drugs.

The drugs were given to the military personnel from 1999 to 2002 while deployed to East Timor and Bougainville as part of international peacekeeping missions.

The precise numbers who received them is uncertain, but campaigners say one drug, mefloquine – also known as lariam – was given to about 1300 servicemen and servicewomen.

They believe another experimental pharmaceutical tafenoquine was issued to 1500 members of the ADF.

Some veterans insist they were compelled to take the drugs.

While the Defence Department says only a small number of veterans have suffered adverse serious effects, there is speculation that hundreds of Australian military personnel may have been diagnosed with chronic brain injuries and psychiatric conditions.

These effects can often be mistaken for post-traumatic stress disorder.

Melbourne-based veteran Mick Kruizinga was given tafenoquine after contracting malaria before being given mefloquine on a second tour of East Timor. The 41-year-old former infantry man has since experienced severe health problems.

“The last eight years he has had major problems and he is getting worse,” his wife Naomi Kruizinga told nine.com.au.

She said his health problems include lesions on his brain as well as high toxicity in his blood system.

But the Kruizingas have received little from the Australian Government, with Mick being refused a Gold Card – which entitles holders to health care treatment funded by the Department of Veteran Affairs.

Instead, the family have paid for Mick Kruizinga’s costly and lengthy medical treatment themselves.

Campaigner Major Stuart McCarthy, who is undergoing treatment for an acquired brain injury after being exposed to mefloquine and tafenoquine, claims the ADF trialled the drugs on a “captive audience” of volunteers.

McCarthy whose overseas service included the Middle East, Africa and the Asia Pacific, told nine.com.au he volunteered to take the drug while deployed in Bougainville after a “sales pitch” by a high-ranking army doctor.

“We were a captive audience … we believed we could trust him with our health.”

Last week, the Repatriation Medical Authority – the government body that determines Statements of Principles for any disease, injury or death that could be linked to military service – dismissed any relation between brain injury and antimalarial drugs after a government investigation.

The authority ruled there is insufficient evidence that exposure to the antimalarial drugs mefloquine, tafenoquine or primaquine causes chronic brain injury.

He told the Townsville Bulletin: “Sadly it often takes decades for the devastating effects of toxic substances to be fully recognised”.

“The concern today is that hundreds of servicemen and women who have been badly affected by mefloquine are still being misdiagnosed and mistreated, almost two decades on after being used as experimental guinea pigs.”

Mefloquine and tafenoquine were developed by the US military’s anti-malarial drug program at the start of the Vietnam War in the 1960s.

By the late 1990s mefloquine was known for serious side effects and ceased to be produced in many countries. It has been linked to many murders, suicides and war crimes over the past two decades and is now used as a drug of last resort by the ADF.

Earlier this month, US Army Staff Sergeant Robert Bales who was convicted of killing 16 Afghan civilians during a shooting rampage in 2012, asked a military court in Virginia for a special hearing to explore evidence that his actions may have been linked to mefloquine, reported the New Observer.

Last year an inquiry by the ADF’s Inspector General reported the “drug trials were conducted ethically and lawfully”, that soldiers volunteered to participate, and that anyone who was sick could be treated for free.

But today the effects of the anti-malarial drugs on service men and service women from a range of countries is under renewed scrutiny.

Concerns have sparked a number of high-level inquiries being held in the US, Canada, Germany and Britain. Germany has gone as far as banning the use of mefloquine.

Dr Jane Quinn, a neuroscientist and neurotoxicologist at Charles Sturt University in Bathurst NSW, who moved to Australia from Britain, has expert knowledge and a tragic personal link to the issue.

Her late husband Major Cameron Quinn, a British Army officer, was given mefloquine during a training exercise in Kenya in 2001.

She told nine.com.au he suffered depression, nightmares and long-term personality change for years before taking his own life in 2006.

Dr Quinn subsequently campaigned for mefloquine to be axed by the British armed forces. Since moving to Australia, she works as a senior lecturer and helps veterans and their families confront the debilitating effects of the drug.

“After taking Lariam my husband was a changed man forever. He went from someone who had never had any mental health problems to a man who started to suffer bouts of suicidal thoughts, depression, anxiety and volatile behaviour,” she said.

Dr Quinn is certain the controversial drug was behind his death.

“I am convinced that the side-effects of Lariam killed my husband. Since his death I have become aware of many other soldiers who have suffered dreadful psychological problems after taking this drug.

“I find it hard to understand why a drug known to cause permanent brain damage and serious psychological problems is still being given to soldiers, or anyone.”

A spokesperson for the Department of Defence told nine.com.au: “Defence has published a significant amount of information on this matter as part of ongoing efforts to assist those with concerns regarding the use of mefloquine in the ADF.”

“That information includes details on the deadly impact of malaria, anti-malarial medications, research publications, an IGADF (Inspector General of the ADF) inquiry report, and the support services that are available, and can be found at www.defence.gov.au/Health/HealthPortal/Malaria/default.asp.”