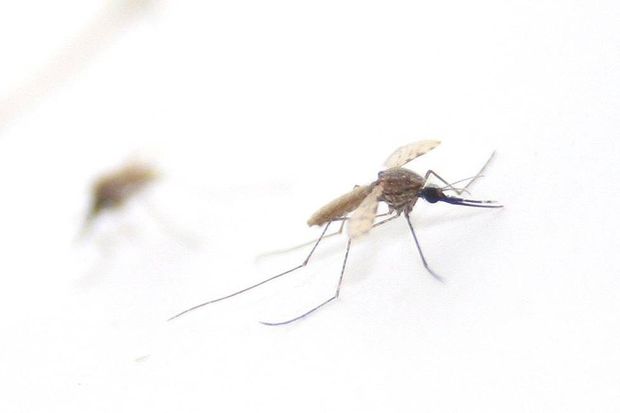 A mosquito is pictured at the University of Arizona in this undated handout photo. The Irish government has agreed to pay a ‘substantial’ amount to a former army sergeant who was given the anti-malarial drug mefloquine in 2009.

As Canada prepares to fight a suit launched by veterans who say the anti-malarial drug they took on deployment in Somalia caused permanent damage, the Irish government has settled a case with one of its former soldiers who says he, too, is suffering the effects of having consumed mefloquine.

The case brought against the Irish Defence Forces by former army sergeant Anthony Cole ended last week when the Irish government agreed to pay him an undisclosed amount that his lawyer, Eamon Murray, describes as “substantial.”

Mr. Cole took the anti-malarial drug before and during deployment to Chad in 2009. He told the court that the drug caused headaches, mood swings, depression and nightmares.

“The state fought the case robustly, calling my client a liar and contradicting my client’s evidence at every possible opportunity,” Mr. Murray said in a telephone interview from his office in Ireland on Monday. “But, at the end of the plaintiff’s case,” he said, “the state buckled and settled the case, paid him compensation and paid all his costs.”

In this country, the federal government and HoffmanLaRoche, mefloquine’s developer, will be in a court in North Bay, Ont., on Friday to argue that a class-action suit brought by soldiers who took part in the Somalia mission of the early 1990s should not proceed because too much time has passed since the suit was launched in 2001.

The soldiers were forced to take the drug as part of a poorly monitored and possibly illegal clinical trial. Ronald Smith, the lead plaintiff in the Canadian case, says the drug left him with a host of residual mental-health issues including depression, aggressive behaviour, poor concentration, social isolation and suicidal thoughts.

Mr. Smith’s suit sat dormant for 17 years as his lawyers debated who would take it to court. It was reactivated as evidence around the world began to link mefloquine to the types of symptoms experienced by Canadian soldiers in Somalia.

His statement of claim says the military required the soldiers to take the drug, but ignored the rules of the clinical trial, which said they must be watched for adverse reactions and treated for any side effects in a timely manner, among other things.

The Irish government conceded no liability but Mr. Murray says future cases should be much easier to fight because the testimony is on record. There are about 57 other Irish soldiers who have also launched suits related to mefloquine.

The Canadian military conducted a review of the medical literature this year and concluded there is no evidence that the drug causes long-lasting problems. But it now says alternative drugs are the preferred options for soldiers who deploy to countries where malaria is a risk.

Remington Nevin, a doctor at the Johns Hopkins University Bloomberg School of Public Health in Maryland, who has studied the drug’s effects for nearly a decade, testified on behalf of Mr. Cole and expects to be called as a witness in the Canadian case, if it goes ahead.

Cathay Wagantall, the Conservative deputy critic for veterans affairs, said she is disappointed that the government is trying to stop the class-action suit by using the procedural argument that too much time has elapsed.

“This government is apologizing for numerous things and, at the same time, will not apologize for what happened in Somalia or at least take the steps to reopen the case and look at it truthfully,” she said, “because these veterans know what they suffered and there’s proof out there.”