This drug is killing Australian soldiers 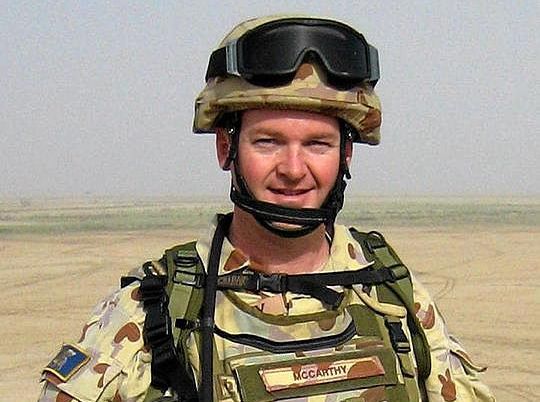 Major Stuart McCarthy while serving in Iraq in 2006.

IF THE much publicised suicide rate of Australian soldiers who have served in Afghanistan is a national shame, then so is the devastating effect of the anti-malaria drug, Mefloquine, that has been administered to an estimated 1,987 Australian Defence Force members over the past 15 years.

So bad are the ongoing psychological effects of mefloquine and tefinoquine – a similar anti-malaria drug – that they have been linked the suicide of Australians who once proudly served their country overseas, including one former 1RAR soldier in Townsville earlier this month, a matter of weeks after he pleaded with the ADF to help people like him.

Ipswich couple Brian and Lee McCarthy have taken up the battle for action ever since their son, Major Stuart McCarthy, began to show symptoms of Mefloquine neurotoxicity after he served as a peacekeeper in Eritrea.

“Stuart had a tremendous time in Eritrea,” Brian said.

“He felt fulfilled, because he believed that he’d been a part of something good.”

It was while he was serving as an engineer with the Australian peacekeeping forces in Africa in 2001 that Maj McCarthy was given Mefloquine, an anti-Malaria drug which is administered by the ADF as a “third line agent” when preferred drugs are not appropriate for the individual concerned.

“Very soon after he felt the symptoms,” Mr McCarthy said.

“There are dreams, suicidal thoughts and the mood swings. The dreams are very bad – extremely bad and very upsetting – and just weird. They are psychedelic, frightening and continuous.”

Maj McCarthy has been diagnosed with acquired brain injury attributed to Mefloquine neurotoxicity.

The brain injury cannot be repaired, and it has led to bouts of major depression and severe short-term memory loss.

Mr McCarthy said his son’s symptoms were similar to thousands of other soldiers around the world who had been given the drug.

It’s why he and Mrs McCarthy have taken up the fight with the ADF to recognise the problem and act on it.

A Senate Inquiry into the mental health of Australian Defence Force personnel heard testimony from Maj McCarthy and Dr Jane Quinn regarding the adverse effects of Mefloquine and, subsequently made a series of recommendations.

Mr McCarthy said the ADF had failed to act on any of the recommendations.

Most importantly he says they have failed to contact ADF members and veterans who have been administered the drug to advise them of the side-effects and offer access to proper neurological assessment.

When questioned on the response to the Inquiry, a Defence spokesperson said that the Government had announced its response to the Senate Inquiry on the Mental Health of ADF Members and Veterans would be tabled when Parliament resumes.

“Until that time it would be inappropriate for Defence to comment,” the spokesperson said.

Maj McCarthy pushed the ADF for an outreach program for soldiers who are suffering from Mefloquine neurotoxicity, but the 13-page submission was rejected on the basis that it would cause distress for ADF members and veterans.

In response, the ADF says it has launched an external website on malaria, mefloquine and the ADF and an email address where individuals can request further information.

“Further to this, we have released specific clinical guidelines designed to assist Defence health practitioners with the management of members who are concerned about mefloquine. These resources have been shared with the Department of Veterans’ Affairs and published on our website,” the ADF says.

Brian McCarthy said he would keep campaigning not only for the ADF to implement the recommendations of the Senate Inquiry, but also for a judicial inquiry so that those responsible for the suffering of soliders like his son can be held accountable.

The ADF’S full response to questions posed by the QT this week:

1. Why won’t the Australian Defence Force implement the recommendations of the Senate Inquiry into the mental health of personnel, published 17 March, 2016?

The Government has announced its response to the Senate Inquiry on the Mental Health of ADF Members and Veterans will be tabled when Parliament resumes. Until that time it would be inappropriate for Defence to comment.

2. Regarding Stuart McCarthy’s request for an outreach program for ADF personnel affected by Mefloquine was rejected on the basis that it could “cause unnecessary distress for the vast majority of members”. Why or how to you believe it would cause distress?

Defence will continue to be open and transparent on this important issue as we are committed to assisting any current and ex-serving members and their families who wish to access more information. Information sharing has been a key component of our response to the concerns raised and the resources we have created are designed to assist anybody who feels they might be suffering, not only current serving members. They include:

Development of a comprehensive external website on malaria, mefloquine and the ADF that can be accessed at www.defence.gov.au/Health/HealthPortal/Malaria/default.asp.

The creation of an email address for individuals to contact us about their concerns or request further information: adf.malaria@defence.gov.au.

Release of various messages and articles in the Service newspapers to encourage individuals who are concerned to seek health care and advice.

Further to this, we have released specific clinical guidelines designed to assist Defence health practitioners with the management of members who are concerned about mefloquine. These resources have been shared with the Department of Veterans’ Affairs and published on our website.

3. Will you release the findings of a report conducted by the Inspector General of the ADF into the Mefloquine trial conducted in Timor?

The inquiry being conducted by the Inspector General Australian Defence Force (IGADF) is ongoing. Completed inquiry reports may be released on a case by case basis by the IGADF, following due consideration of privacy and legal issues.

4. In a response to the Qld Times received in October 2015, the ADF stated that all ADF members were examined following deployment and periodically throughout their careers, and that anyone suffering ongoing symptoms is appropriately managed. Could you provide figures on how many ADF personnel are receiving on-going treatment for symptoms associated with mefloquine side-effects?

To the best of our knowledge within Defence there is only one known case of a member receiving such treatment. However you should note that the symptoms experienced as possible side effects of mefloquine are similar to those experienced with other medications and in a range of medical conditions. Despite these difficulties help is available to those who believe they might be affected by any medication, including mefloquine. It is important to remember that any ADF member who presents with mental health concerns or physical injuries is supported and given access to the full range of recovery and rehabilitation services, regardless of the cause of the condition.