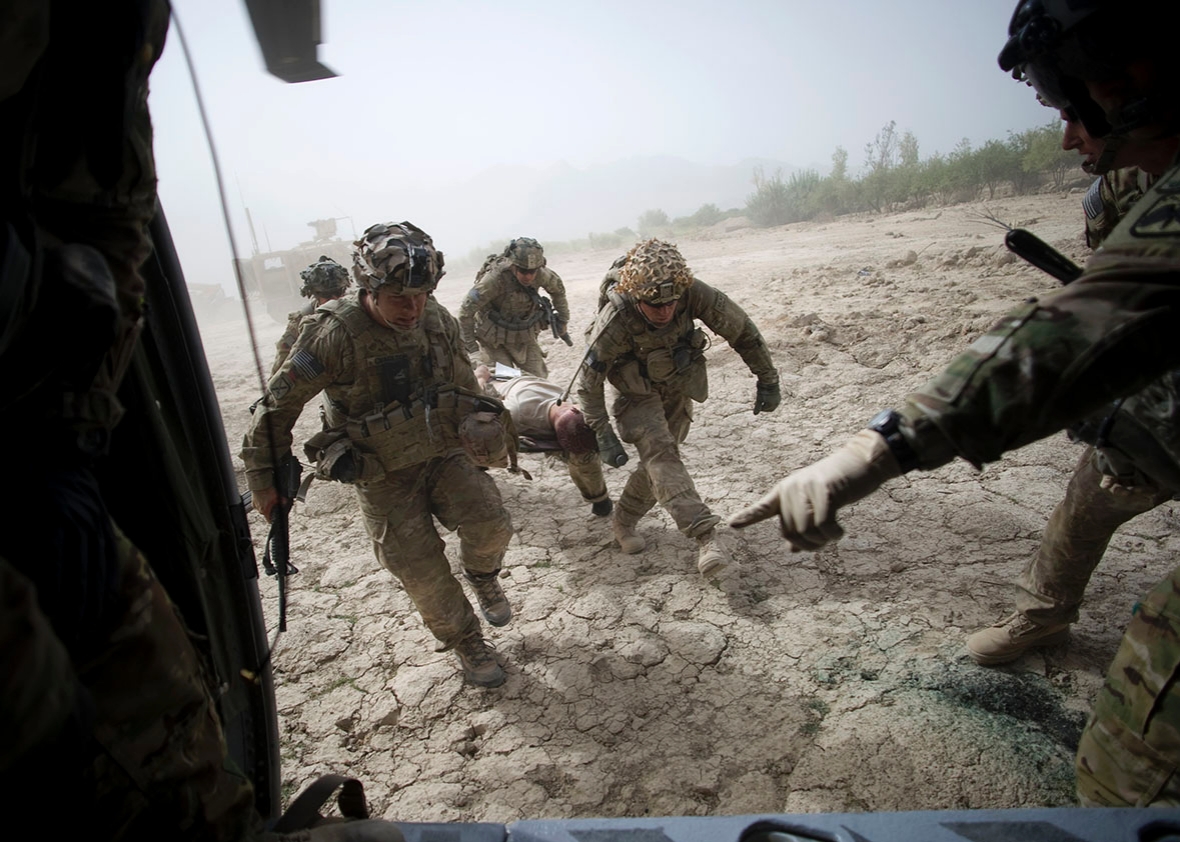 Medics carry a soldier hit by an IED in 2011 in Kandahar, Afghanistan.

The U.S. Department of Veterans Affairs is the world leader in research on post-traumatic stress disorder. No organization spends more money or expends more resources to treat it than the VA. Yet its efforts to stamp out the disorder, which afflicts upward of 30 percent of veterans today and is the fourth most common mental health condition in the world, are often strikingly wasteful and driven by shoddy science. In 2006, the VA began treating veterans with a form of therapy charmingly known as prolonged exposure. It is now a central piece in the VA’s war on PTSD and its most popular type of individual psychotherapy. Prolonged exposure is heavily promoted by the VA, which describes it as the “gold standard” treatment for PTSD.

Prolonged exposure therapy works roughly like this: After taking a brief inventory of the patient’s military service, the therapist asks the veteran to recount the story of his or her worst trauma over and over and over again with eyes closed until the memory of it becomes “habituated,” losing its traumatic charge and becoming like any other normal autobiographical memory. The typical course of treatment lasts about eight weeks and, according to Marsden McGuire, the deputy consultant for mental health care standards at the VA, produces some improvement in 60 percent of veterans who undergo it.

The problem with prolonged exposure is that it also has made a number of veterans violent, suicidal, and depressed, and it has a dropout rate that some researchers put at more than 50 percent, the highest dropout rate of any PTSD therapy that has been widely studied so far.

In 2013, I underwent a six-week course of prolonged exposure treatment at the VA San Diego to deal with the insomnia and nightmares caused by my time in Iraq as a reporter in 2007. (I am a former Marine infantry officer, which made me eligible to receive VA care.) As I discuss in my “biography” of PTSD, it reminded me of something out of A Clockwork Orange, where the main character, Alex, is forcibly reconditioned using a horrific form of aversion therapy known in the movie as the Ludovico technique. After briefly surveying my time in Iraq with a therapist, who I’ll call Scott here, I was asked to tell the story of my near-death experience in an IED ambush in Baghdad in 2007. In the sessions that followed, I retold this story dozens of times. Whenever I tried to change the subject to another part of my time in Iraq, I was told that the only way forward was to tell my IED ambush story over and over until it no longer bothered me or got my heart rate up. Repetition is the key, Scott explained. After telling the story of my close call in Baghdad roughly 100 times, I began to have trouble sleeping. Eventually, I broke down altogether and was unable to read, write, or leave the house. One night after my cellphone failed to dial out, I stabbed it repeatedly with a stainless steel kitchen knife until I bent the blade 90 degrees.

The more I looked into the science behind the VA’s claims about prolonged exposure, the more troubled I became.

My experience with prolonged exposure made my PTSD symptoms far worse than they’d been before. Concerned about this, I began looking into the history of the treatment and discovered that I wasn’t the only one who had had problems with it. A number of the nation’s most experienced trauma researchers have raised flags about it after observing a host of alarming side effects. In 1991, Roger Pitman, a psychiatry professor at Harvard Medical School, discontinued a pilot study of six Vietnam veterans treated with a technique similar to prolonged exposure, known as imaginal flooding, that resulted in two of the patients becoming suicidal and a third breaking 19 months of sobriety. Other patients became severely depressed or began suffering panic attacks between treatment sessions. The results were so unexpected that Pitman conducted a larger study using 20 Vietnam veterans as subjects, published in 1996 in Comprehensive Psychiatry, and found similar outcomes.

“It is important to emphasize that exposure [therapy] may lead to serious complications,” wrote Bessel van der Kolk in his widely cited 2006 book Traumatic Stress: The Effects of Overwhelming Experience on Mind, Body and Society. In a recent letter in response to a New York Times article I wrote on prolonged exposure, van der Kolk expanded upon these ideas, saying, “The premise that the trauma needs to be relived over and over in order to heal has questionable scientific merit, because the brain areas that go offline during a traumatic experience and precipitate PTSD are once again deactivated when people are pressed to re-create the horrors of the past.”

The more I looked into the science behind the VA’s claims about prolonged exposure, the more troubled I became, and the more I began to have doubts about the way the VA treats PTSD. By describing prolonged exposure as the “gold standard” PTSD therapy, the VA implies that the scientific conversation about it has concluded, but a number of clinicians both in academia and the military medical establishment continue to raise troubling questions about the research behind prolonged exposure. And by relying on it so heavily, the VA has neglected to offer a number of less hazardous and less confrontational therapies.

Prolonged exposure is the brainchild of Edna Foa, a clinical psychology professor at the University of Pennsylvania who created it after witnessing the Second Intifada in Israel. But in his book The Great Psychotherapy Debate, Bruce Wampold, a professor at the University of Wisconsin, uses one of Foa’s experiments as a case study to examine much of what is wrong with therapy research today. In a 1991 study, Foa compared prolonged exposure against another kind of PTSD therapy known as “supportive counseling.” As Wampold points out, “The therapists [doing the supportive counseling] were all supervised by Foa, whose allegiance was to prolonged exposure,” a conflict of interest that would seem to throw much of the study’s conclusions into doubt.

When I emailed Wampold about the particulars of Foa’s 1991 study, he had almost nothing positive to say about it and its applicability to military veterans with PTSD: “The patients were sexual abuse victims, not military trauma patients. But for me, the worst issue of that trial was the comparison treatment: A treatment clearly intended to fail. The ‘supportive’ therapists could only respond warmly; the patients were not allowed to talk about their trauma, were directed to talk about other current problems, and were given no therapeutic actions intended to help them. No decent therapist would ever treat a victim of rape in that way.” (Italics are Wampold’s.)

One senior U.S. military psychiatrist I spoke to who has treated some of the most complex cases of PTSD among active-duty personnel said, “Edna Foa is just as strong in therapy circles these days as Pfizer [which makes the antidepressant Zoloft] is in psychopharmacology. They both have in common that they have never published anything negative about their own treatments. We in mental health do not practice our trade based upon science any more. It is based on persuasion and marketing through statistics and randomized controlled trials done by the people who have invented the approaches themselves.”

This senior psychiatrist was deeply concerned about applying research derived from rape victims to military veterans because, as virtually any clinician familiar with PTSD will attest, the two types of trauma are very different and have different clinical presentations. In the case of combat PTSD, a distinct set of symptoms often arises from the guilt and shame associated with the act of killing other human beings. In a 2011 article, Foa breezed over this apples-to-oranges problem, never acknowledging the concerns of Pitman, van der Kolk, Wampold, and the many VA clinicians who have refused to use prolonged exposure on their patients.

To make matters worse, the VA knows that prolonged exposure frequently causes adverse side effects, including exacerbating veterans’ PTSD symptoms, as it did in my case. One 2002 clinical trial, also supervised by Foa and published in the Journal of Consulting and Clinical Psychology, found that 10 percent of patients saw their symptoms get worse after undergoing prolonged exposure. The study, like nearly all of the PTSD research conducted in collaboration with the VA, did not involve male military veterans; the subjects are referred to only as “women with chronic PTSD” and it’s not clear whether they were civilians or members of the military. If my experience and Pitman’s studies are any indication, the side effects for veterans suffering from PTSD could be much worse. In the face of these mounting concerns, the VA has simply opted to repeat its official policy that it is the most scientifically tested PTSD therapy in existence.

Reached for comment, Foa defended the research process behind prolonged exposure, saying, circularly: “As a clinical scientist my interest was to examine the efficacy of these treatments in order to evaluate their relative efficacy.” In response to the critiques about her oversight of the ineffective comparison treatment, she said: “Over the years we have continued to modify the PE protocol according to our clinical experience, and the [prolonged exposure] protocol used in the 1991 study is quite different in details than the one we used in a subsequent 1999 study and a 2005 study when I was only one of the supervisors.”

Foa also disputed Wampold’s critique that research on nonmilitary rape victims might not apply well to veterans: “Most of the rape survivor patients [in the 1991 study] were raped multiple times, not once, and over 50 percent of them were also survivors of child sexual abuse which continued for years. … Thus most of the rape victims in the PE studies had repeated traumas, not a single trauma, and in this respect they are similar to veterans with PTSD.”

Returning home from a war is an existentially challenging experience, and veterans who struggle with PTSD are a vulnerable population with a suicide rate twice that of the general population. Offering them a treatment that is known to have the potential to make their symptoms worse seems like a poor decision by the VA. Clearly, more intellectually diverse and scientifically rigorous research needs to be done to develop the best PTSD treatments for veterans. In the meantime, the VA should curtail its use of prolonged exposure therapy and replace it with less risky and less confrontational forms of treatment, such as cognitive processing therapy, until it has more data about the extent and severity of prolonged exposure’s side effects and its actual effectiveness on combat veterans. As was reported in this Sunday’s New York Times, there are a number of promising PTSD therapies out there, including “interpersonal therapy,” that are more successful and have a smaller dropout rate.

Therapy, like any other kind of human relationship, only works when both parties are being heard and respected. During prolonged exposure therapy at the VA, I felt distinctly unheard and my needs ignored, largely because they diverged from the therapeutic protocols in place at the time. From my standpoint, I just wish that my VA therapist had done his due diligence and warned me at the outset that prolonged exposure might make my symptoms worse and let me know about my other treatment options.

One of the most agonizing parts of military service is the gnawing sense that one is being dehumanized by one’s government, something to be sent downrange and then forgotten. The VA today is under immense pressure to deliver care to veterans suffering after long wars overseas. Despite these pressures, the VA needs to work harder and smarter to insure that veterans are not dehumanized and not treated, in essence, like a human form of ammunition.