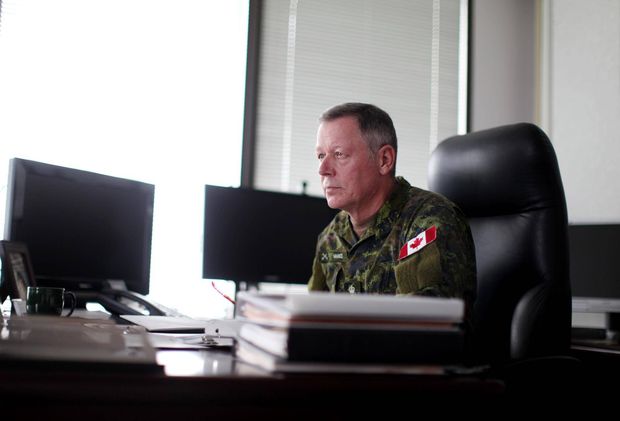 Chief of the Defence Staff General Jonathan Vance working in his office at DND Headquarter November 13, 2015 in Ottawa. The Canadian Forces on Thursday released a report from a task force on mefloquine that was ordered last fall by General Vance.

Canadian soldiers who are deployed to regions where malaria is prevalent will no longer be offered mefloquine as a first option for preventing the disease, the military has decided after a completing a study prompted by veterans who say the drug caused permanent brain damage.

The Canadian Forces on Thursday released a report from a task force on mefloquine that was ordered last fall by General Jonathan Vance, the Chief of Defence Staff. Health Canada simultaneously made public its own findings about the safety of the drug. Both studies conclude there is no evidence that the drug causes long-lasting and permanent neurological and psychiatric problems.

That angers some veterans, who say they experience debilitating mood issues, sleep disorders, aggression, depression and memory loss as a result of mefloquine toxicity.

Read more: What you need to know about antimalarial drug mefloquine

“There is no doubt in my mind that this drug caused, and causes, serious, serious issues for a lot of us,” former soldier Dave Bona said.

The military’s report recommends that the two most commonly prescribed alternatives – Malarone and doxycycline – be considered preferred options for soldiers deploying to countries where malaria is a risk, and that mefloquine be used only when the other drugs are not tolerated or when a soldier has taken it previously, had no problems with it, and chooses to take it again.

The change closely aligns the policy of the Canadian Forces with that of the Australian, U.S. and British military, which have declared mefloquine a drug of last resort. Germany has banned it for its soldiers.

The Canadian military study did not involve original scientific research, but analyzed available studies on the medication and reviewed the Canadian Forces’ experience with it.

“It just infuriates me. It’s like they have cherry-picked the reports they want to use to support their own agenda,” said Mr. Bona, who took mefloquine during the Somalia mission of the early 1990s as part of an unorthodox and possibly illegal clinical trial run by the Department of National Defence and Health Canada. Some blame the drug for the violence in which Canadian troops beat a 16-year-old Somali to death.

Mr. Bona’s partner, Teresa Untereiner, said it is is both dangerous and irresponsible to say mefloquine causes no permanent neurological harm. “When they deny that it has an effect, they’re able to deny the people who have been affected any services,” she said.

Health Canada updated the warning labels for mefloquine in August to emphasize that certain side effects can persist for months or years after the drug is discontinued and may be permanent in some patients. The department said the reported symptoms include anxiety, paranoia, depression, hallucinations, psychotic behaviour and, in rare cases, thoughts of suicide.

How such side effects might affect soldiers when they are deployed to dangerous parts of the world was part of the study released by the military on Thursday, said Lieutenant-Colonel Andrew Currie, the head of the communicable disease prevention program for the Canadian Forces. “At the end of the day,” Lt.-Col. Currie said, “that was certainly part of the decision-making that the surgeon-general had when he proposed the new policy on mefloquine.”

It is important to point out that the number of soldiers who have been using mefloquine has diminished significantly, he said.

In fact, task force could find just 111 military patients who had been prescribed mefloquine between December, 2013, and December, 2016, a time when there was no large deployment to a country where malaria is prevalent. Of those cases, however, it was discovered that 12 per cent were given the drug even though they had a history with anxiety, depression or PTSD that meant it was was not recommended. The report advises the military to develop better screening procedures.

The Commons Veterans Affairs Committee, which has been studying mental health and suicide among veterans, had heard much testimony from veterans such as Mr. Bona who believe they were injured by mefloquine.

Cathay Wagantall, a Conservative MP who is a member of that committee, commended the military for making mefloquine a second-line drug. But by declaring there is no evidence of permanent neurological and psychiatric damage, she said, “I think they are trying to dismiss themselves now from having to deal with the fact that, for years, soldiers have suffered, and veterans have suffered, with the use of this drug.”

Remington Nevin, a doctor at the Johns Hopkins University Bloomberg School of Public Health in Maryland, who has studied the drug’s effects for nearly a decade, was harsh in his assessment of Health’s Canada’s conclusions. The federal department “shamefully appears to be taking a page from the playbook of tobacco company executives in attempting to manufacture doubt about the known chronic effects of mefloquine which are clearly acknowledged by international drug regulators,” Dr. Nevin said.

As for the report of the Canadian military, the recommendation to further restrict use of mefloquine is a tacit acknowledgment that the Forces have failed to use mefloquine safely, and that its continued use poses a risk to its members, Dr. Nevin said.

The Globe and Mail