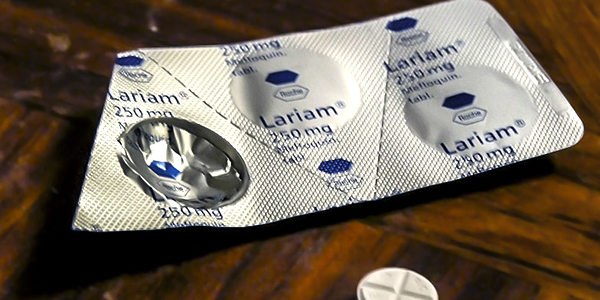 There was a major pharmaceutical shake-up late last month that stands to affect more than 4 billion people worldwide, particularly individuals who earn paychecks from Uncle Sam working overseas. In a statement issued on July 29, the Food and Drug Administration announced that the drug mefloquine hydrochloride will now carry the agency’s strongest warning label. The anti-malarial prophylaxis, which is sold under several different names (including Lariam, Mefliam, or Mephaquin), has been commonly issued to American servicemembers, civilians, and volunteers for decades. Now, a ‘black box’ warning from the FDA states the drug, while fairly effective at fighting malaria, may also cause some very disturbing side effects.

“The neurologic side effects can include dizziness, loss of balance, or ringing in the ears,” the FDA’s statement read. “The psychiatric side effects can include feeling anxious, mistrustful, depressed, or having hallucinations. A boxed warning, the most serious kind of warning about these potential problems, has been added to the drug label. FDA has revised the patient Medication Guide dispensed with each prescription and wallet card to include this information and the possibility that the neurologic side effects may persist or become permanent.”

That’s putting it mildly. In addition to those listed above, the adverse effects of mefloquine includes hair loss, chronic insomnia, diarrhea, and migraine headaches; the drug has also been attributed to numerous psychotic episodes. You might be wondering why mefloquine was released to the public, given its long list of negative side effects. The reason is simple: the pharmaceutical researchers who first developed the drug skipped over several key trial stages, including various tests measuring reaction and tolerability among healthy adults.

Mefloquine hydrochloride was created in the aftermath of the Vietnam War, when the U.S. government was heavily invested in producing a cheap, easy-to-manufacture drug that prevented malaria. More than 40,000 malarial infections (and 78 deaths) were reported among American troops in Vietnam between 1965 and 1970; furthermore, widespread resistance to chloroquine (then the world’s leading anti-malarial agent) had been seen in patients throughout Africa, Asia, and Latin America for nearly 20 years, and the number of cases seemed to be increasing each year. With generous endowments from academic and military organizations across the country, scientists at the Experimental Therapeutics Division of Walter Reed Army Institute of Research identified two synthetic forms of mefloquine, Lariam and Halfan, after screening more than 250,000 strains. According to official records, inmates at the Joliet Correctional Center in Illinois were among those who volunteered to serve as guinea pigs during the initial trials.

However, the developers of Lariam and Halfan failed to conduct key “safety and pharmokinetic studies” involving healthy U.S. civilians. They also neglected to determine whether or not toxicity in humans occurred when Lariam and Halfan were taken together. Fuzzy research didn’t stop the FDA from approving the drugs; Lariam was released to the public in 1989, and Halfan followed three years later. Since the drug was cheap to produce and only taken once a week (as opposed to expensive, once-daily alternatives like Doxycycline, Atovaquone, and Primaquine), mefloquine was heavily prescribed to soldiers, diplomats, civilian contractors, Peace Corps volunteers, and other American personnel living in malarial regions of the world.

Not surprisingly (considering no one bothered to properly evaluate mefloquine), doctors began noting some problematic symptoms among men and women who took the drug. In 1992, the same year Halfan became available to the American public, researchers at Germany’s University of Munster noted 23 documented cases involving “adverse psychological conditions” brought on by mefloquine. Three years later, researchers in Nigeria noted “self-limiting psychosis characterized by acute onset of visual and auditory hallucinations and poor sleep” among six different patients who were administered the drug; none of them had any personal or family history of severe mental illness. Still, the drug’s effects on healthy civilians were not formally studied until 2001; in subsequent trials, scientists have noted that “the incidence of specific neuropsychiatric symptoms including nightmares, anxiety, and psychosis during prophylactic use are each at least 100 times more common than has been previously reported”.

One of the most notorious cases was published in 2006. The incident involved a Nigerian man living in the U.S. who traveled home to visit his family and took mefloquine as his primary anti-malarial prophylaxis; notably, he had never taken the drug prior to his departure, but suffered from frequent bouts of malaria during his childhood in Nigeria. Throughout his stay, he took the recommended weekly dose of 250 milligrams; however, when malarial symptoms set in roughly one week after he returned to the U.S., the man (who was simply referred to as “Mr. A” in the study) took a “one-time therapeutic dose” of 1,250 milligrams. Shortly thereafter, he was admitted to a hospital with severe chest pains; he also complained of halluccinations and high anxiety, but doctors still discharged him. Mr. A suffered a panic attack at work just a few days later, and upon returning home began to incoherently accuse his wife of adultery; she convinced him to visit a second hospital, but he became exceedingly worried the staff was trying to poison him and eventually tried to escape from his room. Doctors administered an ungodly amount of antipsychotic and psychotropic drugs to reduce his paranoia, but his delusions did not fully subside until the sixth day of his hospital stay; he eventually made a full recovery, but doctors and pharmaceutical researchers everywhere took note.

In addition, several studies have found that the hallucinations brought on by mefloquine may exacerbate pre-existing psychiatric conditions. A 2004 article by United Press Internationalhighlighted the averse effects of mefloquine among active and returned military service members. The drug was linked to the strange case of Staff Sgt. Georg-Andreas Pogany, who became the first U.S. soldier formally charged with cowardice since the Vietnam War after he fled his unit in distress. The article also noted that four Special Forces solders who committed suicide took mefloquine just prior to their deaths. In 2009, the military began to curtail widespread distribution of the drug amid concerns that it exacerbated the effects of post-traumatic stress disorder, traumatic brain injury, and other conditions common to active soldiers. However, authorities say it is still occasionally administered to troops as a last resort, and mostly off the record, in places like Afghanistan.

Now, some Army and Pentagon officials have alleged mefloquine may have been a factor in the horrific massacre of 17 Afghani civilians perpetrated by U.S. Army Staff Sergeant Robert Bales in March 2012. These officials have argued that Bales, who received a traumatic head injury in 2010, was considered high-risk for PTSD; taking Lariam, they say, may have been the final straw — especially if Bales himself had a history of mental illness. However, due to medical confidentiality laws, the military has not commented one way or another if Bales was in fact taking the drug. Nonetheless, sweeping changes to the way anti-malarials are doled out to troops have taken place since the massacre occurred.

More evidence is needed to establish a significant connection between mefloquine and Bales’ atrocious actions, but some sources have already begun to speculate that the defendant’s history with the drug could play a role in his impending criminal trial; the initial hearing is scheduled for later this month.

Other serious questions loom, as well. Without the benefit of extensive research into the long-term effects of mefloquine, how will the federal government contend with the millions of former and current employees who were administered the drug for extended periods while living in malarial countries? And what about the billions of people living in China, India, Brazil, Indonesia, Pakistan, Nigeria, and the more than 100 other countries where malaria is endemic? Will restrictions leveled against mefloquine affect it distribution in Third World countries, where a large number of citizens cannot afford costlier anti-malarial drugs? The FDA has taken a step in the right direction by acknowledging the distrubing effects of mefloquine, but the situation is far from resolved.

If you have taken mefloquine for a prolonged period and are concerned about any short- or long-term physical or psychological effects of the drug, please schedule an appointment with a physician. Additionally, Mefloquine (Lariam) Action is a non-profit organization that serves as a support group for individuals who suspect they have experienced mefloquine toxicity.

Read the original article on PACSAFE