MPs say Ottawa should reach out to soldiers who took mefloquine 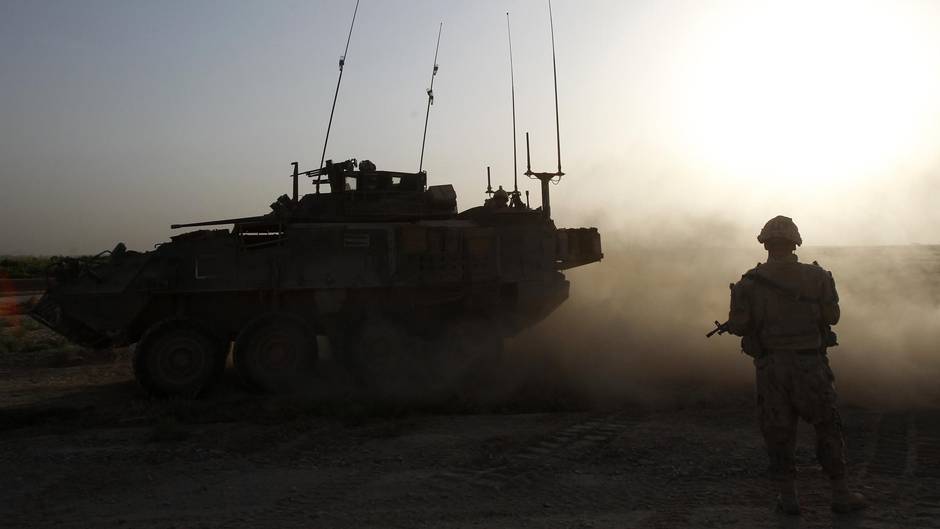 A Canadian light armored vehicle drives next to a soldier during a patrol in the Panjwai district of Kandahar province, Afghanistan, June 25, 2011. Mefloquine was handed out to soldiers in Somalia, Rwanda, Cambodia and Afghanistan. (BAZ RATNER/REUTERS)

Veterans Affairs Canada should contact former military members who were sent to Somalia, Rwanda and other countries in the 1990s to determine if soldiers who took the anti-malaria drug mefloquine now need mental or physical services, a Commons committee says.

The veterans’ affairs committee, which on Tuesday released a report after nine months of studying veterans’ mental health, also recommends the department co-operate with researchers who are willing to study the effects of the drug, which some veterans say gave them permanent brain damage.

But Conservatives and a New Democrat who hold a minority of seats on the committee say the report does not adequately portray the effect of mefloquine on veterans and their families, and that the Liberal majority’s recommendations are too weak.

Both of the opposition parties wrote supplementary reports saying the government should ask an independent body to establish or rule out a connection between the drug and the actions of Master Corporal Clayton Matchee and Private Kyle Brown in Somalia in March of 1993 that ended in the beating death of Somali teenager Shidane Arone.

They want the government to initiate a long-term study of the neurotoxicity of mefloquine – the Department of National Defence recently concluded there is no evidence it causes permanent neurological and psychiatric problems despite the anecdotal evidence from Canadian vets and concerns expressed by armed forces around the world.

And the Conservatives say the government should inform the veterans of their exposure, let them know Health Canada has reclassified the drug to say its side effects are permanent in some cases and tell them how to get help.

The committee started out examining the mental health of veterans, but “if you look at the testimony we received, and some of the briefs we received as well, almost a third of what we heard during this report as public testimony dealt with the issue of mefloquine,” said John Brassard, a Conservative MP from Ontario.

That included testimony from veterans such as John Dowe, who recounted what happened in Somalia on the night Mr. Arone was killed and forced committee members to wonder whether mefloquine was to blame, Mr. Brassard said. “We couldn’t ignore that.”

Irene Mathyssen, the NDP member of the committee, said answers are required about what happened in Somalia, where soldiers were ordered to take the anti-malarial as part of an unorthodox and poorly run clinical trial by the Department of National Defence and Health Canada.

“There is so much contradictory information,” Ms. Mathyssen said. “We heard so much impassioned testimony from people who had been there, people who had suffered.”

A spokesman for Veterans Affairs Minister Kent Hehr said his office is reviewing the committee’s report in detail “and we will respond to each recommendation to ensure that veterans and their families have the care and support they need, when and where they need it.”

It would be difficult, if not impossible, for Mr. Hehr’s department to find everyone who has taken mefloquine, as recommended by the committee, because Veterans Affairs does not have the medical records of former military personnel who are not enrolled as clients. But that information may exist at National Defence.

Last fall, the military’s Surgeon General surveyed the medical literature about mefloquine. Although he concluded that the long-term negative effects have not been proven, he decided that the Canadian Forces would no longer offer the drug as a first option for preventing the disease during deployments to regions where malaria is present.

The Conservatives say: “the Surgeon General’s report was not strong enough in its rebuke of mefloquine.”

The committee report approved by the Liberals warns that those types of symptoms have a great deal of overlap with the symptoms of post-traumatic stress disorder (PTSD), and also that there is no accepted diagnosis of mefloquine toxicity syndrome.

Mr. Hehr promised earlier this month that his department will provide assistance to veterans who can connect an injury to their military service.

But Mr. Dowe said “the clearest and most present danger is that many service members [who are experiencing the effects of mefloquine] will carry on with the misdiagnosis of PTSD and receive treatment towards that, traditional therapies which do not work.”

The Globe and Mail