Veterans, families want answers over Forces’ use of Mefloquine 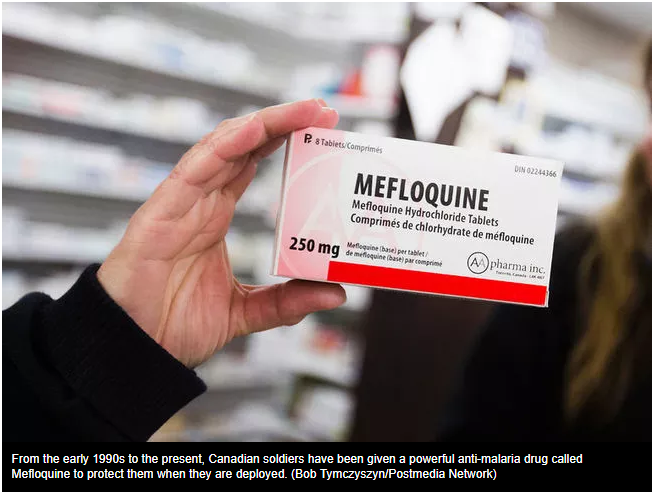 The call for accountability over the Canadian Forces’ use of a controversial anti-malaria drug is growing louder and veterans and family members hope Prime Minister Justin Trudeau will hear their cries for help.

A former medic who served in Somalia, the wife of a soldier disgraced in the Somalia Affair, the mother of a soldier who killed himself in Rwanda and a doctor with expertise in the neuropsychiatric effects of Mefloquine toxicity recently submitted written statements to the Standing Committee on Veterans Affairs outlining the drugs’ devastation.

Marj Matchee writes her husband, Clayton, suffered paranoia and hallucinations prior to his 1993 arrest for the deadly beating of a Somali teen.

“You see things when you sleep. You see it in the daytime too,” she recalls him saying.

Many veterans who were forced to take the drug before it was licensed still suffer from side effects that Health Canada and AA Pharma, the Canadian supplier of the drug, quietly added to Mefloquine’s warning label last year.

“We must do more to reach out to these veterans, to acknowledge the harms that Mefloquine has caused them, and commit to funding research to study and ultimately try to reverse these effects,” Matchee writes.

Dr. Remington Nevin, of Johns Hopkins University, says Mefloquine toxicity can cause brain damage that mimics PTSD, so sufferers may receive the wrong treatment and symptoms such as suicidal thoughts persist.

So it’s unclear how many former soldiers like Lionel Desmond, who killed his wife, daughter, mom and himself on Jan. 3, have committed suicide.

Conservative MP Cathay Wagantall, a member of the Standing Committee on Veterans Affairs that has urged Health Canada to review Mefloquine, said it’s frustrating our military has yet to follow the lead of our many allies and either ban the anti-malarial or list it as a drug of last resort.

“With all the evidence now available, they’re choosing to pretend it’s not happening,” she said.

The Department of National Defence currently has no plan to contact current or former soldiers and ask if they are suffering any known side effects of Mefloquine.

“There is a Surgeon General’s review ongoing and the results are expected at the end of March,” the DND reported.

Veterans Affairs encourages any former soldiers who need help to call 1-866-522-2122 or our visit www.veterans.gc.ca.

“The health and well-being of veterans is a top priority for the government of Canada and we are committed to providing Veterans with the support that they need, when they need it,” Veterans Affairs said.

Retired Canadian Forces general and Senator Romeo Dallaire served in Rwanda where he was affected by the drug Mefloquine. In his new book Waiting For First Light: My Ongoing Battle with PTSD, Dallaire discusses the drug’s effect on him:

“The drug, Mefloquine, affected my eyesight, sleep and frame of mind. It was the preferred anti-malaria medication because it was taken weekly, instead of daily. As early as January 1994, I had been in touch with Ottawa to say this drug was affecting my ability to function, and I want to stop taking it. Their response was that my doing so would be considered a self-inflicted wound: a chargeable offence.”

LINKS TO THE PAST

Some suicidal and homicidal incidents with suspected links to Mefloquine:

– Dec. 25, 1994: Canadian Airborne Regiment Cpl. Scott Smith told a reporter Mefloquine caused him to hallucinate while in Somalia, then two months later he killed himself on Christmas Day in Rwanda.

– 2000: Now retired lieutenant-general Romeo Dallaire, who has admitted Mefloquine affected his ability to function in Rwanda in 1994, attempted suicide with alcohol and pills.

– March 12, 2015: Decorated veteran Joseph Woods, 42, a special forces soldier who served in Croatia and Somalia where all troops were given Mefloquine, hanged himself while in Maplehurst prison and died two days later.

– Jan. 3, 2017: Decorated veteran Lionel Desmond, 33, of the Royal Canadian Regiment, was suffering from PTSD after serving in Afghanistan when he shot his wife, their 10-year-old daughter and his mom in Nova Scotia.